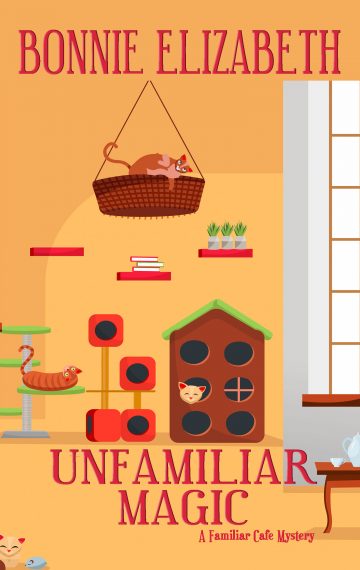 Who wouldn’t do all they could to help a friend out of a jam?

Jade Owlens, owner of Jade’s Café, a very special feline familiar café, starts her Tuesday like any other. While she’s having tea with Trinity and Natalie, her two best friends, disaster strikes.

Police find Trinity’s boss dead in the library. Someone bludgeoned him to death.

In no time, the police zero in on Trinity as a suspect and before Jade knows it, her friend is under arrest.

In a town filled with summer visitors, too many of whom seem intent upon trying Jade’s thin patience, Jade and Natalie know they have to solve the mystery of who murdered Trinity’s boss before she’s convicted of a murder she didn’t commit.

Can the two solve it before the murderer strikes again?